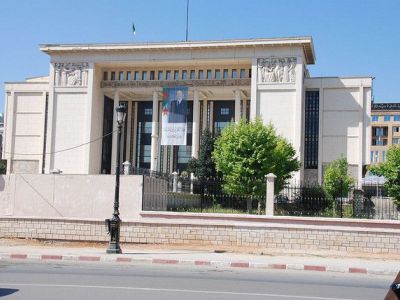 The Civic House was built in 1935, designed by Léon Claro who won the architectural contest in 1927, announced by Alger's municipal authorities. The building represents a piece of Classic Architecture and bears features of the then emerging Socialist style. From the very beginning, it was planned as a concert hall, exhibition space and municipal library. The central part of the building is an exhibition hall. Upstairs, there is a ballroom, a theater, a conservatory and an art gallery. The interior of the Civic House was worked on by the School of Algiers' painters. Sculptors Paul Belmondo (father of the famous French actor) and George Beguet decorated the bas-relief of the main facade. Currently, this building hosts the headquarters of the UGTA (General Union of Algerian Workers).
Image Courtesy of Flickr and Gérard Beytout.