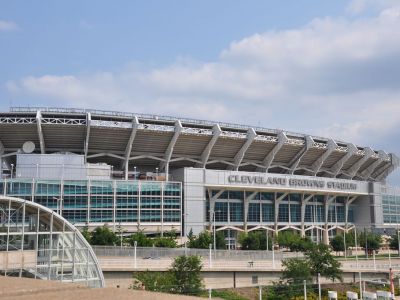 Cleveland Browns Stadium, home of the Cleveland Browns of the National Football League, is located on North Coast Harbor, near the Great Lakes Science Center and the Rock and Roll Hall of Fame. The stadium sits on 31 acres between Lake Erie and the Cleveland Memorial Shoreway (Ohio State Route 2). It has a capacity of over 73,200. The stadium hosts other events, such as college and high school football games, soccer and concerts. It is a concrete and glass structure, using precast concrete. Natural stone accents were used at the base of the stadium.
Image by GoonSquadSarah on Flickr under Creative Commons License.
Sight description based on wikipedia

Want to visit this sight? Check out these Self-Guided Walking Tours in Cleveland. Alternatively, you can download the mobile app "GPSmyCity: Walks in 1K+ Cities" from iTunes App Store or Google Play. The app turns your mobile device to a personal tour guide and it works offline, so no data plan is needed when traveling abroad.

The City of Cleveland dates back to 1796 when the Connecticut Land Company laid out the area into a township. They named the new town after their leader, General Moses Cleaveland.

With its waterfront location, the city became a major center for trade and commerce over the next few decades. When the railroad arrived in the area in the mid-19th century, the town began to evolve into a central...  view more

Cleveland has some of the best museums in the mid-west US. The Museum of Art, Dunham Tavern Museum and the Museum of Natural History are just a few of these extraordinary places. Discover Cleveland’s great museums on this self-guided tour.