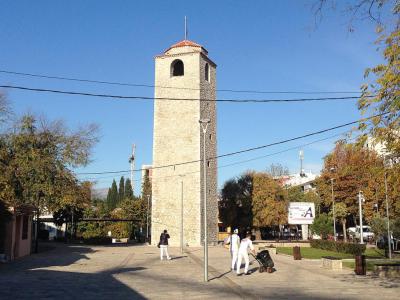 The Clock Tower of Podgorica is located at Bećir Beg Osmanagić square, in the Stara Varoš neighborhood. It's one of the very few Ottoman landmarks that survived the bombing of Podgorica in World War II. Sahat Kula was built in 1667, by Adži-paša Osmanagić, a prominent citizen of Podgorica. According to the legend, the clock was brought fromItaly. For a long time, it was the only public clock in the city. Around 1890, a metal cross was placed at the top of the tower. The cross was made by Stevan Radović, Lazar Radović's grandfather. Today, Sahat kula is an important cultural monument of Montenegro, protected by law. The clock was renovated in January 2012, when the old mechanism was replaced by a new digital one.
Image Courtesy of Wikimedia and Rasho992.

Want to visit this sight? Check out these Self-Guided Walking Tours in Podgorica. Alternatively, you can download the mobile app "GPSmyCity: Walks in 1K+ Cities" from iTunes App Store or Google Play. The app turns your mobile device to a personal tour guide and it works offline, so no data plan is needed when traveling abroad.

Create Your Own Walk in Podgorica

Creating your own self-guided walk in Podgorica is easy and fun. Choose the city attractions that you want to see and a walk route map will be created just for you. You can even set your hotel as the start point of the walk.

Podgorica, the capital city of Montenegro, although not a typical European eye candy, does contain a number of sights well deserving attention, particularly the modern-built Millennium Bridge over the Morača River and the old stone bridge over the Ribnica River, much as the Turkish-built, centuries-old Clock Tower rising over the old town. Take this orientation walk to see these and other popular...  view more