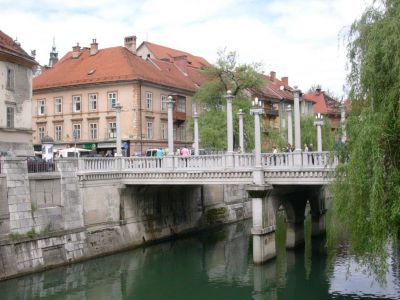 The Cobblers' or Shoemakers' Bridge across the River Ljubljanica is one of the oldest bridges in Ljubljana. It dates as far back as the 13th century, and was initially called the Upper Bridge (Zgornji Most). Back then, it was a wooden bridge with a butcher's shop on it. Story has it that the stench from meat was so strong that the king paid to have the meat shop removed, and its place was taken by shoemakers; hence the present name. Over the centuries, the bridge was reconstructed numerous times prompted by floods and fires until in 1867 an iron bridge was built. Later, in 1931, it was replaced with the current stone bridge, designed by architect Jože Plečnik.