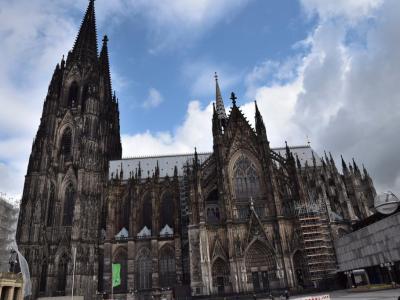 Cologne Cathedral (Kölner Dom, officially 'Hohe Domkirche St. Peter und Maria') is a Roman Catholic church in Cologne, Germany. It is the seat of the Archbishop of Cologne, and is under the administration of the archdiocese of Cologne. It is renowned as a monument of Christianity, of German Catholicism in particular, of Gothic architecture and of the continuing faith and perseverance of the people of the city in which it stands. It is dedicated to Saint Peter and the Blessed Virgin Mary. The cathedral is a World Heritage Site, one of the best-known architectural monuments in Germany, and Cologne's most famous landmark. It is visited by 20.000 people every day. Visitors can climb 509 stone steps of the spiral staircase to a viewing platform about 98 m (322 ft) above the ground. The platform gives a scenic view over the Rhine.

Construction of Cologne Cathedral began in 1248 and took, with interruptions, until 1880 to complete. It is 144.5 meters long, 86.5 m wide and its towers are approximately 157 m tall. The cathedral is one of the world's largest churches and the largest Gothic church in Northern Europe. Cologne's medieval builders had planned a grand structure to house the reliquary of the Three Kings and fit its role as a place of worship for the Holy Roman Emperor. Despite having been left incomplete during the medieval period, Cologne Cathedral eventually became unified as "a masterpiece of exceptional intrinsic value" and "a powerful testimony to the strength and persistence of Christian belief in medieval and modern Europe".

Why You Should Visit:
Simply jaw dropping in size. You may never see another church so detailed and so large.

Tip:
Take a look at the beautiful mosaics on the floor in the Cathedral's rear part.
You may also climb up to the top for a great view, or find the underground parking with plenty of parking places and see the original foundations exposed there.