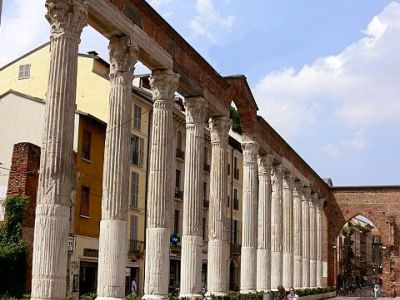 Situated in front of the San Lorenzo Basilica, Colonne di San Lorenzo is the most famous remnants of Roman Empire in Milan. With a row of columns on either side, the monument is one of the most popular tourist attractions in Milan. The columns were extracted from a Roman temple or bath house of the 2nd century Mediolanum (latin for Milan) and brought to the present location in the 4th century. These tall Roman columns are sixteen in number standing at the sides of a square. A red brick architrave is balanced at the top of these columns. Front redbrick walls have a pointed arch and a round arch gateway. Message of Lucius Verus, roman co-emperor with Marcus Aurelius, are written on marble tablet on the wall. One of the medieval Roman marble gates of the city is still present on the south side of the columns.

Old houses were present in the space between the church and columns till 1935. When the renovation work was carried out, these houses were destroyed and the monument on the front side was segregated. After the World War II, the church complex on the rear side also became isolated. An urban park known as Basilicas Park is now situated here.

The layout of the church is in the form of a four leaved flower consisting of an open central area and a surrounding ambulatory, expressed in 2 stories and 4 semicircular recesses, each featuring 5 arches. The church has byzantine features with a triple archway entrance and the central layout with a grand dome on octagonal support. Four square towers and a typical group of adjacent chapels such as the 5th century octagonal Saint Aquilinus chapel that houses precious paleochristian mosaics is also present. The ruins of martyr Saint Aquilino of Milan are kept in this chapel. A 17th century reliquary ark made by Lombardian architect Carlo Garavaglia is also housed here.

The dome of Basilica San Lorenzo was rebuilt with a Baroque influence with the lanolin on top, after the destruction of original dome.

This urban monument square is very popular in Milan and provides a good social atmosphere for both locals and tourists.
Image by Bigorenzo on Wikimedia under Creative Commons License.
Sight description based on wikipedia