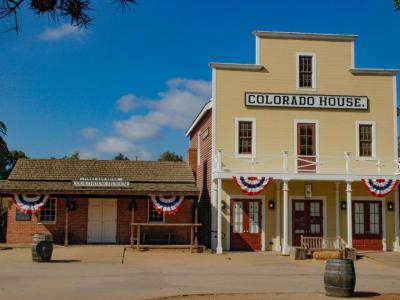 Adjacent to San Diego's first courthouse – now a museum on its own – is the Wells Fargo & Company History Museum, housed in a reconstructed 1850s hotel building, and featuring a reconstructed 19th-century telegraph office and stage stop. It's a small place, but loaded with interesting artifacts, including one of the original WF stagecoaches – an iconic reminder of the changing times the bank has been an integral part of, serving to illustrate the rapid transition to modern-day USA.

Seeing how banking was done and how money was moved long time ago in the West is always very interesting; many don't realize how heavily armed they were or that they had so many problems with people trying to steal their shipping cargo. The carriages – that used to cram up to 18 people inside – are nicely preserved and give the feel of the craftsmanship demanded to build not only a stable but also good-looking vehicle that could withstand the less than ideal roads.

Especially if you're a history buff, plan on spending a little time here. If you have children with you, there are some interactive displays such as a telegram machine where they can tap out a real-time message using Morse code.