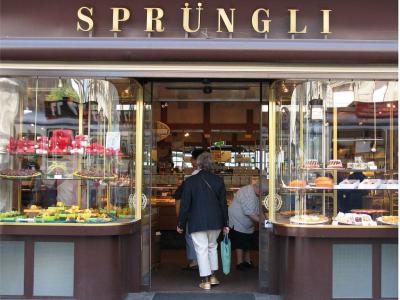 Founded in 1836 by Rudolf Sprüngli, the luxury confectionery Confiserie Sprüngli is one of Zurich’s very first chocolate makers. However, the company has been renowned internationally primarily for its signature macarons, called "Luxemburgerli" invented by a Sprüngli confectioner from Luxembourg. In 1892, the chocolate-producing branch of the business split off from the confectionery and now operates independently as Lindt & Sprüngli. Their assortment includes an immense range of chocolates with various fillings, pralines and truffles, of which the most recognizable are the Grand Cru truffles.

Now in the hands of the family's sixth generation – since 1994, Sprüngli has several locations in Zurich: one in the main train station and two on Bahnhoffstrasse, at No. 21 and 67.

The Sprüngli café on Paradeplatz, Bahnhofstrasse 21 is a traditional meeting-place of the elderly ladies of Zürich's upper class. Local folklore has it that the young men who attend this café alone may signal their availability to the well-to-do females by turning over coffee spoons in their cups. But according to the company's director, this is a persistent myth reflecting Zurich's more puritanical past, when the Sprüngli café was one of the few places where upper-class women could talk to strangers without risking their reputation.