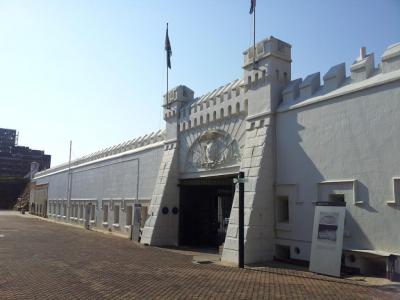 The hill was formerly the site of a fort which was later used as a prison. The Old Fort Prison complex is known as Number Four. The original prison was built to house white male prisoners in 1892. The Old Fort was built around this prison by Paul Kruger from 1896 to 1899 to protect the South African Republic from the threat of British invasion. Later, Boer military leaders of the Anglo-Boer War were imprisoned here by the British.

The Old Fort prison was later extended to include "native" cells, called Section 4 and Section 5, and, in 1907, a women's section was added. An awaiting-trial block was constructed in the 1920s. Both political activists opposed to apartheid and common criminals were held at the prison. Mahatma Gandhi was imprisoned here in 1906, and striking white mineworkers in 1907, 1913 and 1922.

Why You Should Visit:
You can go into the cells, see and touch. There are signs everywhere in English to give you more information, as well as an orientation film to start. There is also an exhibition on Mandela and Gandhi.

Tip:
Go for the guided tour. You'll get so much more out of it (and it's only a few bucks extra)!

This sight is featured in a self-guided walking tour of Johannesburg, South Africa within the mobile app "GPSmyCity: Walks in 1K+ Cities" which can be downloaded from iTunes App Store or Google Play. Please download the app to your mobile phone or tablet for travel directions for visiting this sight. The app turns your mobile device to a personal tour guide and it works offline, so no data plan is needed when traveling abroad.