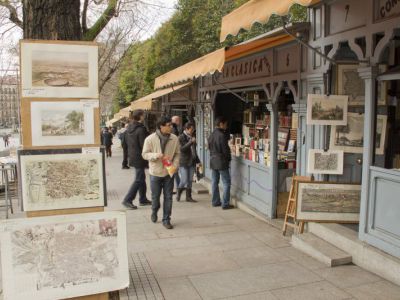 Established in 1925, the Cuesta de Moyano is the famous pedestrian alley which is the site of Madrid's daily book market, where over 30 old-fashioned blue kiosks and more simple stalls are dedicated to the sale of old, antiquarian, second-hand books, magazines and maps. The market begins at the southwest corner of the Retiro Park, at the gate of the Royal Botanical Garden and continues on toward Calle de Alfonso XII, linking Paseo del Prado with the rest of the park. There is a statue for each of market's end, one is dedicated to 19th-century Spanish novelist Pio Baroja, and the other one -- to Claudio Moyano, the 19th-century Spanish politician after whom the passage was actually named.

As for the books, this place is a heaven for book lovers! Although most of the books and magazines found here are in Spanish (Castilian), it's still fun to browse through market's trademark shabby kiosks, looking for rare editions and collectable mid-century magazines, enjoying along the tranquil sights of outdoor Madrid.