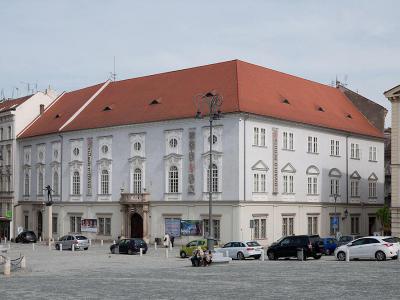 The Reduta Theatre (Czech: Divadlo Reduta) is a theatre situated in Brno. Known in the 18th century as the Taverna Theatre, it served as a venue for theatrical performances presented mainly in German and Italian. In 1767, Wolfgang Amadeus Mozart performed with his sister in a concert there.

After a series of extensive fires in 1785 and 1786, the city council decided to rebuild the theatre in the neoclassical architectural style, with a new two-story main hall. The reconstructed theatre, now named the Reduta Theatre, presented mainly German plays, with performances in Czech held only infrequently. The last devastating fire in 1870 caused the theatre to close again, after which the building was used as the city market hall. In 1918, following the establishment of the new Czechoslovak state, the activities of the theatre were again restored. In the 1950s, the building was redesigned according to the plans of architects Bohuslav and Kamil Fuchs. Up to the 1990s, the theatre served as a stage for Czech operettas. The last reconstruction was completed in 2005. The project was awarded the Grand Prix in a competition held by the Czech Chamber of Architects. As of 2010, the theatre is a part of the National Theatre in Brno. Reduta has no permanent ensemble. Now part of the National Theatre in Brno, it is the oldest theatre in Central Europe.
Image by Petr Šmerkl on Wikimedia under Creative Commons License.
Sight description based on wikipedia