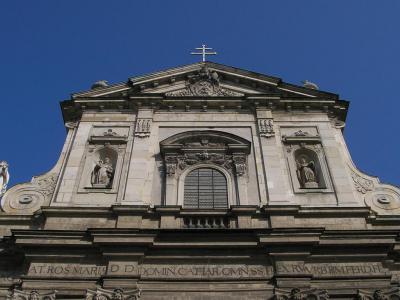 The Dominican Church (German: Dominikanerkirche), also known as the Church of St. Maria Rotunda, is an early Baroque parish church and minor basilica in the historic center of Vienna, Austria. It is the third church built on the same site in the course of time.

The first church on this site was built in 1237 by the newly arrived Dominicans on a parcel of land allotted in 1225-1226 by the duke Leopold VI. The church was enlarged between 1240–1270 and a new choir was added in 1273. A series of fires caused the construction of a new Gothic church between 1283 and 1302. The nave was extended between 1458 and 1474. This church consisted of a nave with five cross vaults, and two aisles.

This church was heavily damaged during the first siege of Vienna by the Turkish army in 1529. The choir was demolished and the nave was partly taken down. The building became more and more dilapidated during the next period.

The new-found self-awareness of the Counter-Reformation didn’t allow any more such a sorry state for a church. In 1631 the Dominicans started to build a new oblong church with a dome, following the plan of Jacopo Tencala, architect of Prince Maximilian of Liechtenstein. The master builders were Jacopo Spacio, Cipriano Biasino and Antonio Canevale. They introduced to Vienna the Baroque style of Italy. The first stone was laid by emperor Ferdinand II on 29 May 1631. The structural work was finished in 1634. The church was consecrated on 1 October 1634. The finishing touch was finally given in 1674. The church was elevated to the status of basilica minor in 1927 under the name “Rosary Basilica ad S. Mariam Rotundam”.
Image by Gryffindor on Wikimedia under Creative Commons License.
Sight description based on wikipedia