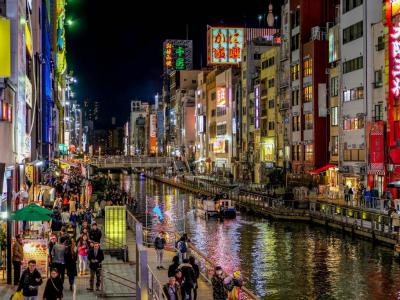 The Dotonbori area of Osaka is the unofficial gastronomic district of the city. Eating places of all sizes offering a variety of cuisine are located on either side of the Dotonbori-gawa Canal. It is also a popular shopping area in the city.

The Dotonbori restaurant area is located on the south bank of the Dotonbori- gawa Canal. The street also has amusement facilities for children, Bunraku puppet shows, movie theaters and storytelling halls. It has become a landmark location in Osaka and the scene of many movies including the 1989 film, Black Rain. The 17th century Hozen-ji temple lies to the south of the street along the canal with a paper lantern giving off an orange light at sunset. The lane near the temple has many Edo Period latticework buildings.

The Dotonbori is busy during the day and at night. At night it is lit by magnificent neon lights including mechanized signs of the Glico Running Man and the Kani Duraku Giant Crab. Restaurants serve local Osaka delicacies like the Tokoyaki or octopus balls and Okinomiyaki or vegetable and meat stuffed pancakes. Visitors can also get Fugu, a poisonous fish called the blow fish which needs to be prepared carefully or could prove fatal to the person eating it. There are Shabu or all you can eat restaurants where customers can cook their own treats. Dotonbori has the most vibrant and exciting environments among shopping streets across Japan.
Image Courtesy of Wikimedia and Terence Ong.