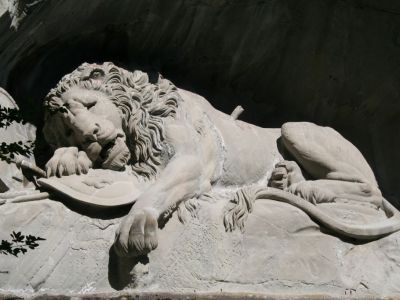 The Lion Monument is a sculpture designed by Bertel Thorvaldsen and hewn in 1820–21 by Lukas Ahorn. It commemorates the Swiss Guards who were massacred in 1792 during the French Revolution when revolutionaries stormed the Tuileries Palace in Paris. The American writer Mark Twain (1835–1910) praised the sculpture of a mortally-wounded lion as "the most mournful and moving piece of stone in the world."

The monument is carved into the cliff face, it measures a staggering ten meters in length and six meters in height. The Lion Monument is dedicated Helvetiorum Fidei ac Virtuti ("To the loyalty and bravery of the Swiss"). The dying lion is portrayed impaled by a spear, covering a shield bearing the fleur-de-lis of the French monarchy; beside him is another shield bearing the coat of arms of Switzerland. The inscription below the sculpture lists the names of the officers, and approximate numbers of the soldiers who died (760), and survived (350).

Tip:
Go early or come late as there are plenty of tour groups that visit this beautiful monument.
Very modern "self-cleaning" public restrooms can be found on the hill to the right.
Image by Marie-France Trachsel on Wikimedia under Creative Commons License.
Sight description based on wikipedia

This sight is featured in a self-guided walking tour of Lucerne, Switzerland within the mobile app "GPSmyCity: Walks in 1K+ Cities" which can be downloaded from iTunes App Store or Google Play. Please download the app to your mobile phone or tablet for travel directions for visiting this sight. The app turns your mobile device to a personal tour guide and it works offline, so no data plan is needed when traveling abroad.

Lucerne is an amazing city that sits on the side of Lake Lucerne and is surrounded by beautiful mountains. Sometimes known as "The City of Light", Lucerne is one of Switzerland's key cities. Its long and rich history has bestowed upon it lots of amazing architecture and fascinating stories. Take this walking tour to discover the real jewels of Lucerne.

Due to Lucerne's long religious and cultural history, its architecture is one of the most popular for tourists in all of Switzerland. It boasts several remarkable bridges because of how the city is divided by the Reuss river. Your attention will also be struck by the magnificent churches and historic castles and towers. Take our walking tour to discover the most famous architectural sights in...  view more

Lucerne is packed with all kinds of great tourist attractions. And when you're done with all these spectacular sights, the city offers a wide range of options for a great night out. Take our tour to find the most well-known nightspots in Lucerne.