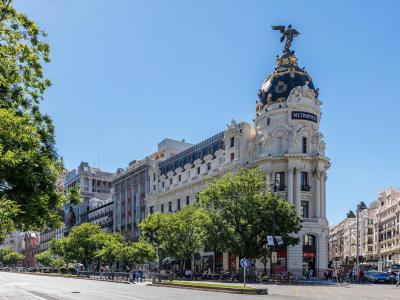 On the corner of Calle de Alcala and Gran Via sits another of Madrid’s famous landmarks, the Metropolis. One of the most photographed in the city, this graceful edifice was erected in 1911 by the French architects, Jules and Raymond Fevrier, who won the contract via competition launched by the Union y el Fenix insurance company, owner of the land the building stands on. The brothers created the facade in a lovely Beaux Arts style, featuring the first floor balconies separated by four pairs of Corinthian colonnades, with the statues of Mining, Industry, Agriculture and Commerce, sculpted by St Marceaux and Lambert, set above them.

The central dome is black with elaborate decorations in 24-carat gold-leaf. At the foot of the dome there is a statue by Benlliure. Topping the dome once was the statue of Phoenix with Ganymede on one of its wings – the Fenix symbol, which was removed in 1972 when Metropolis Seguros bought the building. Today, another winged statue – of goddess Victoria – graces the top of the dome.

The extensive damage caused to the building, and particularly its statues, over the years, by pollution and pigeon excrement, prompted the need of restoration. The works started in 1988 and gave the building a new roof; the facade was thoroughly cleaned up. The work took over seven years and, since then, the cleaning has been done annually so as to keep this popular landmark as beautiful as it was on the day of its inauguration.

Why You Should Visit:
Certainly one of the most eye-catching buildings in the heart of Madrid, albeit closed to the public.

Tip:
You can get a great view of the Metropolis (from a different angle) from the top of the Circulo de Bellas Artes building (across the street), if willing to pay a few euros.
At night, the pinnacle of the Metropolis' tower is illuminated, creating a terrific view.
Image by Manuel on Flickr under Creative Commons License.
Sight description based on wikipedia