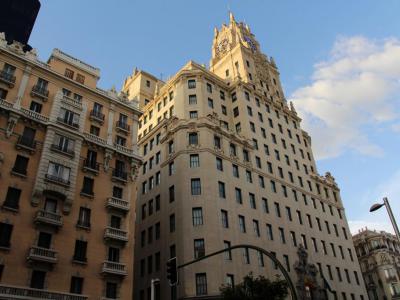 While you are in Madrid, don’t miss a trip to the Edificio Telefonica on the Gran Via, which was once the tallest building in Europe.

The building was designed by Ignacio de Cardenas who based his plans on those of the American architect Lewis Weeks. The 90 meter high, 14 storey American-style skyscraper has nevertheless a Spanish Baroque facade of elaborately sculptured ornaments.

Since its construction in 1929 it has been a symbol of Madrid and was used during the civil war by the Republican army as a lookout for enemy troop movements and it housed the offices of the foreign press. Ernest Hemingway was one of the foreign journalists at the time and he got the inspiration of his famous book “For whom the bell tolls” here. Unfortunately, its height also made it an ideal target for bombing raids by Franco’s troops.

Today the building plays a more peaceful role in Spanish life. The first two floors are shopping malls where you can buy any and every kind of communications equipment. Other floors house the Museum of Telecommunication, the Technology Museum and an auditorium. Two other floors are given over to temporary Spanish art exhibitions. The rest of the building serves as office space.
Image by Manuel M. Vicente on Wikimedia under Creative Commons License.
Sight description based on wikipedia

There have been many writers who express a love for Madrid, but one who did so quite famously was Ernest Hemingway. During his life, Hemingway was a frequent visitor of Madrid, finding in it his muse, popular success and critical acclaim. Don Ernesto, as he was called in Spain, was a frequent visitor to specific sites in Madrid that became major tourist attractions. The majority of those sites are...  view more