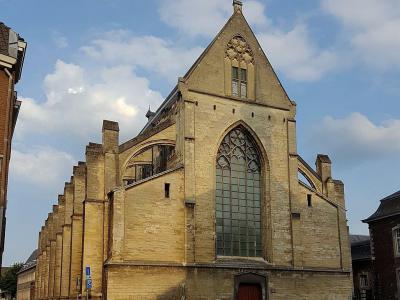 Eerste Minderbroederskerk translates to First Franciscan Friars’ Church. It dates back to the 13th century and is a fine example of Maastricht's medieval religious architecture. Its Gothic facade is similar to Dominican Church’s. Years ago, Franciscans were driven out of the city and the church was closed. The furniture, altars, pulpit and organ were publicly sold. The church then served as a cantonment building, and today it houses a regional archive. The Second Franciscan Friars’ Church was built in the 17th century.
Image by Kleon3 on Wikimedia under Creative Commons License.

Statues and Monuments Tour of Maastricht