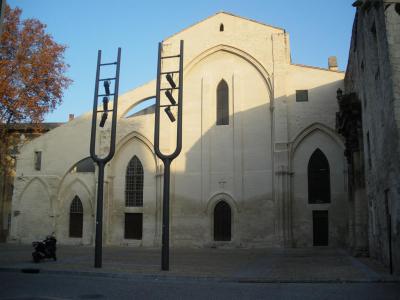 The Celestine Church, located in Corps-Saints Square, was ordered under Clement VII in 1389 and the first stone was laid by Charles VII. Initially a wooden chapel on the tomb of Pierre de Luxembourg, the church itself was built from 1395 to 1452. The cloister and the monastery were built in the mid-15th century. The 1625 altar of the Chapel of St. Peter of Luxembourg was rebuilt in Baroque style by Francis Royers of Valfenière, and in 1693 the relics of Saint Benezet were transferred here. During the Revolution, it stored Avignon’s richest works of art. The Celestine Order was founded in 1264 by Pierre de Moron, who became pope under the name of Celestine V in 1294. This order practiced with slight differences to the Rule of St. Benedict.
Image by jean-louis zimmermann on Flickr under Creative Commons License.