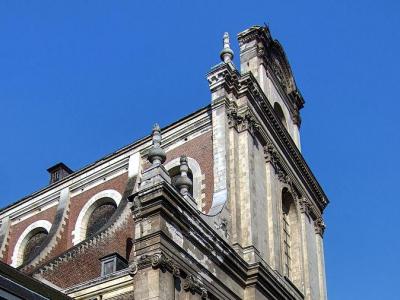 The Église Saint-Étienne de Lille is a church dedicated to Saint Stephen, classed as a monument historique since 1971. It is one of the largest Jesuit churches in France. The church's stone façade is 29 m high and its height is accentuated by the very straight rue de l'Hôpital militaire. Its style is resolutely classical and inspired by the Roman Baroque, with two superimposed orders (Ionic order at the bottom, Corinthian order at the top). A 57 m high square bell tower topped with a campanile is to the left of the choir.

The church's interior is 61 m long, sober, light and on a Latin cross plan. The nave has 7 bays, with side chapels all along the aisles, and the choir extends the nave and ends in a semi-circular apse. The choir and aisles are covered by an ogive vault and the nave by a barrel vault. The black and white marble flooring comes from the former chapel and the stained glass windows between 1854 and 1862.
Image by Velvet on Wikimedia under Creative Commons License.
Sight description based on wikipedia