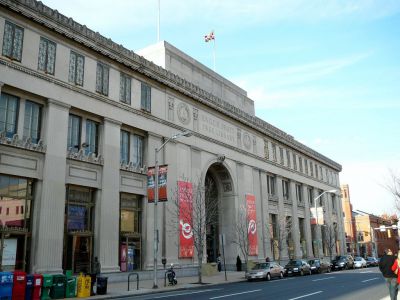 The Enoch Pratt Free Library is the public library system of Baltimore, Maryland. Its Central Library occupies the eastern half of a city block bounded by Franklin Street to the north, Cathedral Street to the east, Mulberry Street to the south and Park Avenue to the west. The flagship of the system, it was designated the State Library Resource Center by the Maryland General Assembly in 1971. The system also includes twenty-two branches each located throughout the city.

Its establishment began on January 21, 1882 when philanthropist Enoch Pratt offered a gift of a central library, four branch libraries and a financial endowment of US $1,058,333 to Mayor William Pinkney Whyte and the City Council. His intention was to establish a library that "shall be for all, rich and poor without distinction of race or color, who, when properly accredited, can take out the books if they will handle them carefully and return them." The grant was accepted by the civic government and approved by voters later that year on October 25.