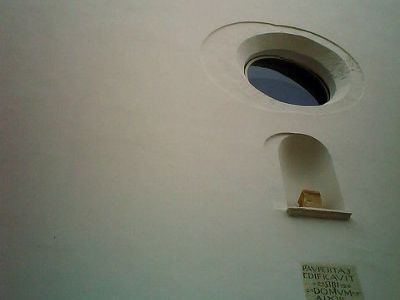 The Església de Santa Maria de Gràcia, also known as Església de l’Hospitalet, stands on the site of a former medieval hospital known as the Hospital of Arrabal. Documents dating back to 1410 mention the hospital and its chapel dedicated to Mary Full of Grace on the site. The hospital and chapel were funded by Universitat, which was an autonomous local government in medieval Ibiza. At the end of the 17th century, following the abolition of the Universitat Government, the hospital was closed and the Bishop of Tarragon, Josep Mora, ordered a grand church to be built. The church was completed in 1708 and it features a barrel vault nave inside and a whitewashed exterior with a rose window.

There are different exhibitions that are held inside throughout the year. Exhibitions are often related to modern art from Ibiza as the church is now part of the art museums acquisitions. The Església de Santa Maria de Gràcia is located within the Dalt Vila historical quarter and UNESCO World Heritage Site.
Image by Ferran Nogués on Flickr under Creative Commons License.