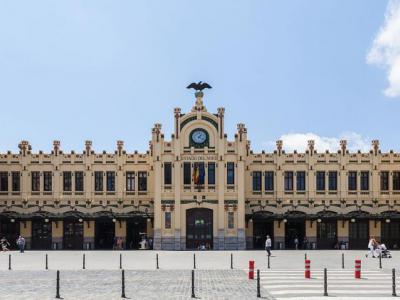 The North Railway Station is the main train terminal in Valencia. From here trains leave daily for several cities in Spain, such as Barcelona, Madrid, and the French boarder. The building is a beautiful example of a modernist architecture, constructed in the early 20th century. Architect Demetrio Ribes designed this majestic and well balanced building in the center of the city.

The outside of the building is decorated with elements that are representative of local architecture. There are also two lovely mosaics on the façade. Inside the station, the decor is also quite appealing. The modernist theme is carried out with more mosaics. The mood is bright, colorful, and the building is worth seeing even if train travel is not on the agenda. The entire first floor is open for public use, while the mezzanine is occupied by offices.

While visiting a train station may be a bit out of the ordinary, it is a nice attraction to see, especially when combined with the bullring next door. If train travel is on the agenda, be sure to arrive a bit early to explore the station before departure.
Image Courtesy of Wikimedia and Diego Delso.