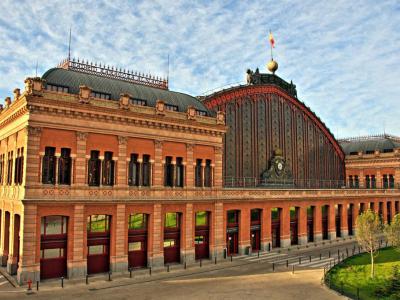 If you come to Madrid by train, you will undoubtedly arrive at the Atocha Railway Station. If you come by another means of transport, don’t miss a trip to see the station which is the biggest in Madrid.

The original station was built in 1851 and destroyed by fire in 1882. A newer, larger station was built in 1892 by Martin Alberto Palacio Elissague who worked on the Crystal Palace in the Buen Retiro Park. He used the palace as a model and created a glass and wrought-iron vault, giving the central area a light, airy appearance.

The station was expanded to four times its original size by Rafael Moneo in 1985. The tracks were moved to the new structure and the “old” Atocha was transformed into a waiting/meeting area with shops and snack bars. A wonderful tropical garden was installed in the center of the area.

The station is the final destination of the AVE (high-speed trains) from Barcelona, Seville, Saragossa and Valencia, as well as commuter and intercity trains from Madrid’s suburbs.

After the terrorist attack on the 11th March 2004, a cylindrical glass monument, the Monumento a los Victimes del 11M, was raised in front of the station in memory of the people who died there.

Why You Should Visit:
Beautifully designed and refreshingly decorated is the first thing you'll notice at this central train station.
The interior serves as a botanical garden of sorts with palm trees and platforms filled with dozens upon dozens of turtles.
You'll also find cafes across the road next to the Reina Sofia Museum offering budget-friendly breakfast and lunch options (try El Brillante).

Tip:
Have some coins available if you want to use public bathrooms.
Image by Hugh Llewelyn on Flickr under Creative Commons License.
Sight description based on wikipedia