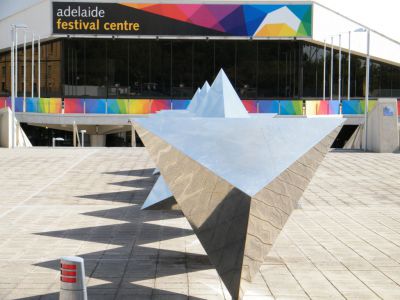 The Festival Centre Plaza also serves as host to an outdoor collection of sculpture, including the prominent stainless steel Environmental Sculpture by Bert Flugelman. As well as the Festival of Arts, the Centre hosts the annual Adelaide Cabaret Festival in June and OzAsia Festival in September, and the biennial Adelaide International Guitar Festival.
Image by Michael Zimmer on Wikimedia under Creative Commons License.
Sight description based on wikipedia

This sight is featured in a self-guided walking tour of Adelaide, Australia within the mobile app "GPSmyCity: Walks in 1K+ Cities" which can be downloaded from iTunes App Store or Google Play. Please download the app to your mobile phone or tablet for travel directions for visiting this sight. The app turns your mobile device to a personal tour guide and it works offline, so no data plan is needed when traveling abroad.