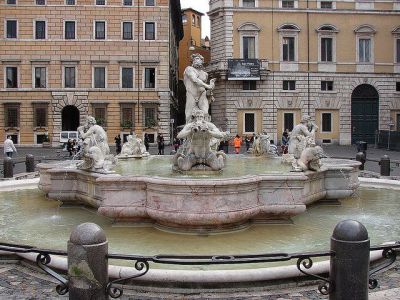 Piazza Navona boasts three fine statues, one of which, on the southern end of the square is the impressive Fontana del Moro. The original fountain was constructed by Giacomo della Porta in 1575, in Pietrasanta marble, called “holy stone” because it was also used in parts of St Peter’s Basilica. Although Della Porta allowed his students to place four tritons blowing on shells and four masks around the border of the basin, there was no centerpiece, as public fountains at that time weren’t meant to be beautified.

There is a rather amusing history surrounding the fountain: In 1652, Olympia Maidalchini lived in a house overlooking the fountain and she wasn’t happy with it, thinking it wasn’t impressive enough to stand outside her house. So she asked her brother-in-law, Pope Innocent X, to do something about it. The pope gave a small amount of money to Bernini and commissioned him to create something worthy of his rather bossy sister-in-law. Apparently, the small amount of money offended the great artist and he gave the job to one of his students, who produced three dolphins holding up a shell. If Bernini was offended by the pitiful payment, “Donna” Olympia was likewise unimpressed by the student’s efforts. She had another moan at the Pope, who dug deeper into his coffers and Bernini produced the beautiful statue of the Moor holding a dolphin. He might have overdone it a bit, because the statue was so big that the basin had to be enlarged. In 1874, during a restoration of the fountain, the original statues were moved to the Galleria Borghese and replaced with copies. In September 2011, the fountain was damaged after a vandal attacked it with a hammer. The vandal also damaged the Trevi Fountain that night.
Image by Rafael Jiménez on Flickr under Creative Commons License.
Sight description based on wikipedia