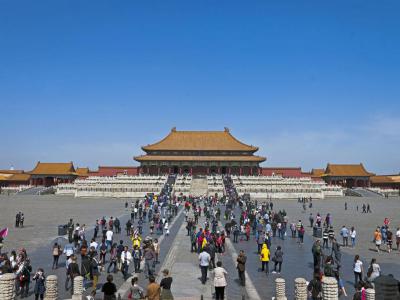 A trip to Beijing is incomplete without a visit to Forbidden City, the huge, majestic and best preserved imperial Chinese palace. This impressive and gorgeous palatial structure exemplifies traditional Chinese palatial architecture and has influenced cultural and architectural developments in East Asia and elsewhere.

This Palace Museum houses precious historical and cultural relics of China. In 1961, it was listed by the Chinese central government as a historical monument to be specially preserved. Forbidden City was declared a World Heritage Site in 1987 and is listed by UNESCO as the largest collection of preserved ancient wooden structures in the world.

This palace is listed as one of the five most important palaces in the world. It was home to 21 Ming and Qing dynasty emperors between 1368 and 1911. In keeping with the traditional beliefs, the palace was constructed to resemble the Purple Palace in heaven, believed to be the residence of God. "Forbidden" referred to the fact that no one could enter or leave the palace without the emperor's permission.

The palace is built over an area of 72 hectares. There are 8704 rooms, 980 buildings and 90 palaces with 150,000 square meters total floor space. Structures including the palace and all the gates of the Forbidden City are arranged around Beijing’s south-north central axis.

A ten-meter high wall encloses the complex of 3,430-meter circumference. The moment you reach this impressive complex, you will be stunned by the magnificence of the four watchtowers at each corner and the moat that acted as the first line of defense.

Why You Should Visit:
Forbidden City should be at the top of any Beijing itinerary. Taking in the scale and majesty of the buildings is a terrific experience.

Tip:
Don't forget your passport – you will need it to buy a ticket and gain entry. Get there as early as you can to avoid the hoards of tourists. When hiring a guide, make sure they speak good English and negotiate on price and time. At the very least, rent the audio guide. Make sure you visit the Imperial Gardens before exiting and go to Jingshan Park (through the underground passage) for a panoramic view of the Forbidden City from above.