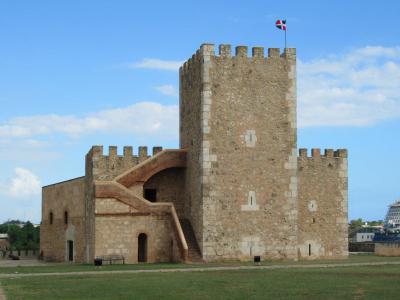 The Fortaleza Ozama (in Spanish; Ozama Fortress in English) is a sixteenth-century castle which lies at the entrance to Santo Domingo, Dominican Republic and overlooking the Ozama River. Named after this river, the castle, also referred to as "La Fortaleza" or "The Fortress", is the oldest formal military construction still standing in America. An impressive architectural structure of medieval style and design, the Tower of Homage (in Spanish: Torre del Homenaje) stands in the center of the grounds. The castle was designed to guard the entrance to the port of Santo Domingo, and defend the city from seaborne enemies. Construction began in 1502. It was well-built enough to serve as a prison until the 1960s, when the prison was closed, the "Fortaleza" was restored and it opened to the public as a tourist attraction. It is located at the end of Las Damas Street.
Image by Ulises Jorge on Flickr under Creative Commons License.
Sight description based on wikipedia