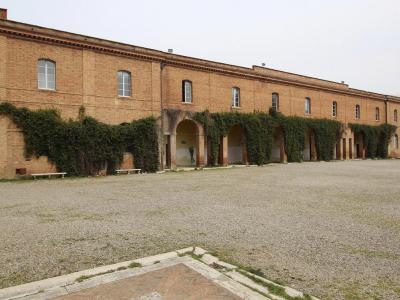 The Fortezza Medicea, or Medici Fortress, is located near the San Prospero District of Siena, next to the Stadio Artemio Franchi. It is also known as the Fort of Santa Barbara. The Medici Fortress was commissioned by Cosimo di Medici after the conquest of the city by the Florentines. It was built on the site of an earlier fort built by the king of Spain, Charles V, after the Spanish army conquered Siena in 1548. In 1552, the Sienese revolted against the Spanish and razed the fort to the ground. Cosimo I built the fortress on the site, to prevent a further revolt by the Sienese, in 1560.

At first, the Medici Fortress had an L shape. After the Medici family completely established their power over Siena, their military engineer, Baldassarre Lanci, rebuilt the fort and gave it a square shape. On each of the four corners is an imposing brick built rampart, and on three of these the Medici coat of arms stands above the head of a lion. On the fourth, south facing corner, however, there is only the head of a lion. The fortress was demilitarized only at the end of the eighteenth century, at which point it became part of the city’s public life. In 1937, following a major restoration, the fortress was transformed into its present condition as a public park. It houses an Enoteca (a commercial center focused on the local wine industry) and frequently hosts art exhibitions. It is also used for festivals and concerts and is home to the Siena Jazz foundation. The fortress is a substantial structure, with internal dimensions of approximately 180 by 125 meters and external dimensions of about 270 by 200 meters. If the outer wall is included, the structure has an external perimeter of approximately 1,500 meters.
Image by Eulenjäger on Wikimedia under Creative Commons License.
Sight description based on wikipedia