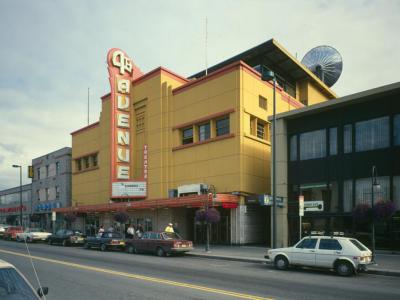 The Fourth Avenue Theatre, also known as the Lathrop Building, is a movie theater in Anchorage, Alaska that has been described as Art Deco, Streamline Moderne, and Art Moderne in style. Built beginning in 1941 and completed in 1947 after a halt during World War II, somewhat after the heyday of these styles, it was a large 960-seat first-run theater until the 1980s.
Image Courtesy of Wikimedia and Jet Lowe.
Sight description based on Wikipedia.