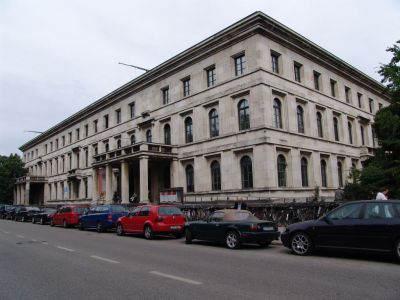 The Führerbau - translated as "the Führer's building" - is a Nazi party edifice located in Königsplatz and was built from 1933 to 1937 to the design of architect Paul Ludwig Troost. The first plans were made in 1931, and the building itself was completed three years after Troost's death by Leonhard Gall.

During the Nazi times, it served as a representative building for Adolf Hitler. The Führerbau has historical significance for being the place where Neville Chamberlain and Adolf Hitler signed the Munich treaty in September 1938.

Architecturally speaking, the Brienner Strasse is a symmetry axis - at the Katharina-von-Bora-Strasse 10, a very similar building stands: The "Verwaltungsbau der NSDAP" (Administrative Building of the NSDAP). After the German surrender, the US occupation forces used both buildings as the "Zentrale Sammelstelle" (central collecting place) that cared about the looted pieces of art garnered by the Nazis throughout Europe. Today, the building houses the Hochschule für Musik und Theater (University of Applied Sciences of Music and Theatre), and its congress hall serves as a concert venue.
Image Courtesy of Wikimedia and OlivierCotton.
Sight description based on Wikipedia.