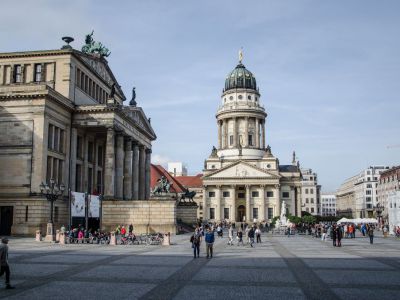 The Gendarmenmarkt is a square in one of the most beautiful parts of Berlin. It houses the spectacular ensemble of three classical buildings: the so-called Fransözicher Dom (French Cathedral, named after the community of French Protestants who settled in Berlin after having fled the religious repression in the late 17th century); the Deutsche Dom (German Cathedral, almost perfectly symmetrical to the first one); and, in between, the Konzerthaus Berlin (Berlin concert hall).

Fabulously picturesque, the area looks much like part of the Imperial Capital and may even give Vienna a run for its money. In the center of the square there is a lovely fountain with a monumental statue of Germany's renowned poet Friedrich Schiller with the musicians often playing around. The Konzerthaus is the most recent addition to the place. During World War II, most of the buildings here were badly damaged or destroyed, but now have been restored with a lot of original pieces.

Why You Should Visit:
There is quite a bit to take in, so wander around at your leisure. Luckily, there is no hard sell of tickets and any tourist stuff. While there are shops, bars and restaurants, they are discrete and upmarket, rather than tacky. A lovely place to sit and watch people for a while. Might be worth visiting at night when it's all lit up.

Tip:
There is also a Lowenbrau bar, offering this great beer seemingly unavailable anywhere else these days.
Image by Leon Bovenkerk on Flickr under Creative Commons License.
Sight description based on wikipedia