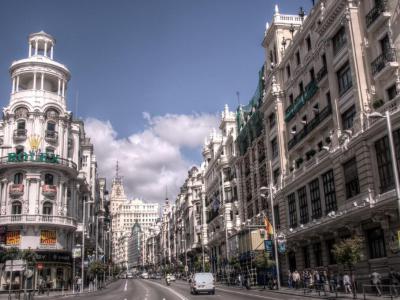 Gran Via, Madrid (must see)

The Via runs from Calle de Alcala to the Plaza de Espana and is lined with theaters, hotels and, of course, shops. You will find everything you could wish for here, from leather handbags and shoes to souvenirs with prices to match.

The Via also crosses squares, such as the Plaza Callao which has a lot of cinemas and ends at the Plaza de Espana where you will find two of Madrid’s famous skyscrapers, the Edificio Espana and the Torre de Madrid.

The Via is not without its own splendid tall buildings: the Edificio Metropolis, which was built in the early 20th century and has a winged statue of Victoria on its dome; the Edificio Telefonica, the 90-meter high American style building and the Edificio Grassy, built in 1917. The latter, just off Calle Alcala at the beginning of the Gran Via, has decorations on its facade that are a remarkable mixture of Medieval, Spanish Renaissance, Spanish Modernism and Classical French. At the top of the building is a rotunda of two superimposed belvederes. On the ground floor is the famous Grassy watch shop and in the basement is a marvelous Museum of Antique Clocks.

Why You Should Visit:
A great place to stroll and take in the sights, particularly the skyline and the frontage of many of the old buildings.

Tip:
Early evening is probably the best time to walk the walk, particularly on hot days.
Image by Bracketing Life on Flickr under Creative Commons License.
Sight description based on wikipedia