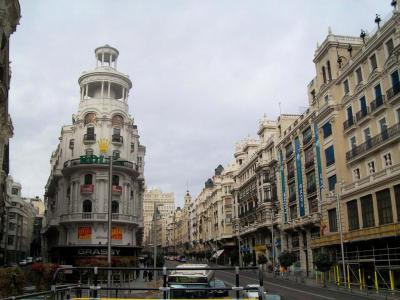 Just next to the Metropolis Building is the Grassy Edifice (Edificio Grassy), a massive structure named after the jewelery shop it used to host on the first floor. It was built in a modernists art deco style with an original column-like cupola at the top. It is one of the most striking buildings of Gran via and it also contains a museum that exhibits rare watches that have belonged to royalties all over Europe. The Edificio Grassy was built between 1916 and 1917. It was constructed on a triangular piece of land, in the same way as the Edificio Metropolis next to it. Moreover, its architect Eladio Laredo aimed to achieve an architectural similarity between both of them. This trend was respected to a certain extent along Gran Via. It comprises two independent buildings, which are joined together by the hall and the patio. Eclectic in its architecture, it boasts a rotunda topped by two superimposed belvederes of Renaissance influence. In 1981, the Edificio Grassy was immortalized by painter Antonio Lopez in his hyperrealist masterpiece "La Gran Via". A plaque placed at the entrance of the building facing to Calle del Caballero de Gracia informs that in spring 1840 Theophile Gautier lived in this area.
Image by Adal-Honduras on Wikimedia under Creative Commons License.
Sight description based on wikipedia