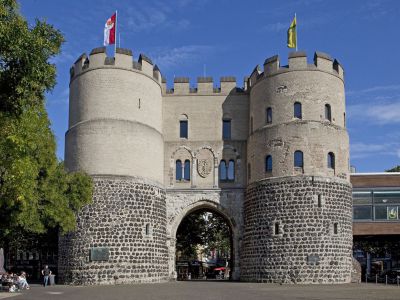 You can enter the city of Cologne through 12 gates and the Hahnen Gate, or 'Hahnentorburg' is the most popular among them. It was through this gate that the German Kings arrived in this city after their coronation in Aachen. They paid a visit to the Cologne Cathedral and prayed at the Three Magi shrine. Construction of this gate spanned five years between 1235 and 1240. The land surrounding the gate was owned by a citizen Hageno and the gate was probably named after him. Over a period of time, people started referring to the gate as Hahnentorburg.

This gate features two towers that are crenelated and semi-circular in shape. Before you enter, look up above the entrance where you will find a beautiful depiction of Cologne’s coat of arms. It was in 1890 that the tower was first renovated. Renovation work was carried out by Josef Stubben, one of the city's famous architects. You can find a memorial plaque here that commemorates his construction outside the city walls. During World War II, the tower was again damaged and reconstructed later.

Hahnentorburg has performed many functions through ages. It has been used as an exposition hall, museum and a prison. Today, this popular tourist spot is home to the carnival society, Ehrengarde der Stadt Köln 1902 e.V.

Why You Should Visit:
Massive gateway from medieval times and probably the best in Cologne.

Tip:
Some great pubs, bars, and restaurants close-by, and worth the walk along parts of the old wall or to the Rhein...
Image by Hpschaefer www.reserv-art.de on Wikimedia under Creative Commons License.