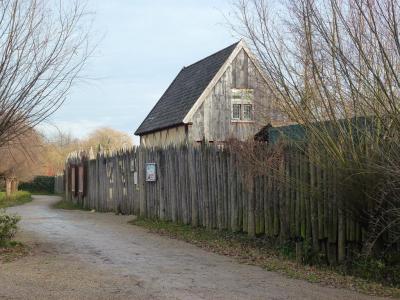 The museum has several distinct target audiences. Primary among these are school children, who comprise most of the visitors on weekdays. In the weekends and during holiday season the museum focuses on regular tourists. The museum features a lot of living history exhibits as well as semi-historical reenactments. During holiday seasons extra activities are staged for children. The museum also arranges historically themed corporate and family outings outside of opening hours. Some 60.000 people visited the museum in 2005.
Image by mararie on Flickr under Creative Commons License.
Sight description based on wikipedia

This sight is featured in a self-guided walking tour of Eindhoven, Netherlands within the mobile app "GPSmyCity: Walks in 1K+ Cities" which can be downloaded from iTunes App Store or Google Play. Please download the app to your mobile phone or tablet for travel directions for visiting this sight. The app turns your mobile device to a personal tour guide and it works offline, so no data plan is needed when traveling abroad.

Genneper Park is one of the most exciting places to visit fit for every member of the family. It is located in an environmental friendly area, where visitors will have the chance to enjoy both the clean air and activities associated with strong health like hiking, skiing and swimming. Children have a special place in the present guide. Every presented attraction offers the younger ones special...  view more