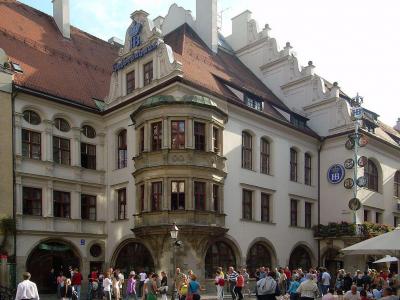 What to buy here: Beer Stein from the Hofbräuhaus- Dating all the way back to 1589, the famous Hofbräuhaus in Munich was founded by the Duke of Bavaria, Wilhelm V. Originally, the Hofbräuhaus building was not open to the public, but in 1828—lucky for both tourists and locals alike!—the building opened its doors to the masses. Today, it is a warm place, thick with traditional atmosphere and friendly vibes, where you can come to eat typical Bavarian food, listen to the Oompah band play loudly on stage, and gulp down the rich Hofbräuhaus beer in large, one-liter steins, which the Germans call a Mass. In 1516, the “Bavarian Beer Purity Law” was passed, which states that only natural ingredients can be used to brew the beers. To this day, the beers of Munich, Hofbräuhaus beer included, are held to that high, delicious standard of beer manufacturing. Available in the gift shop of the Hofbräuhaus am Platzl in downtown Munich, you can bring home one of the large, traditional glass Hofbräuhaus beer steins. Just don’t tell any Germans that you will probably be filling it with something other than the pure, golden Hofbräuhaus beer. Cost: around 10 to 15 Euros.
Image by Dana Siewert under Creative Commons License.

Museums in the Bavarian Capital

The city of Munich has several museums that are a veritable treasure trove of information ranging from empires, the animal kingdom, plants and paleontology to the arts, crafts and the music. The city’s museums attract millions of visitors every year. Whether you are an art aficionado or want to experience Bavarian culture through the ages, there is something for everyone in the several museums...  view more

Kreuzviertel is one of the four quarters of Munich Alstadt. Historically here was located the centre of the clergy as there was a particularly high number of monasteries. Take this tour to admire the beautiful palaces and churches located in this area, and explore interesting shopping spots and traditional pubs.