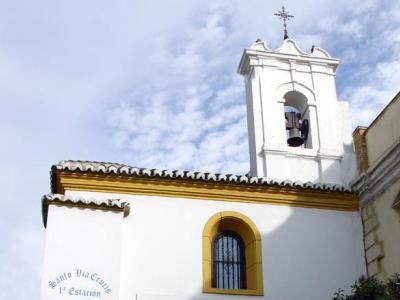 This church was once the chapel of a connected hospital. The Iglesia de San Lazarus stands on a busy commercial area of Malaga. The church is dedicated to St. Lazarus. The order of St. Lazarus is an ancient order that ran hospitals and provided medical care to patients suffering from leprosy.

The Iglesia de San Lazaro in Malaga was established by Christian rulers of Spain after they defeated the Moors. The building was damaged by the floods of 1628. The order of St. Lazarus provided extensive services to the people of Malaga during the great plague of 1637. The Brotherhood of Rescue made the church their home from 1706 to 1962. Today it is the principal church of the San Lazaro Parish.

The architecture of the church is in Mujedar style. This design was influenced by Islamic architecture and flourished from the 12th to 16th centuries. The church has a single nave with individual chapels. There are many murals with death as the theme. The church was expanded in the 17th century but fell to disrepair after the expansion. In 1948, the Brotherhood of Rescue and the civil government of Malaga funded the restoration of the church under the direction of architect, Enrique Atencia.

The church has a congregation of over 12,034 parishioners from north and central Malaga. Between 1997 and 2004, the structure was enlarged and modernized once again to meet the demands of a vibrant and modern membership.
Image by MarinGarcia on Wikimedia under Creative Commons License.