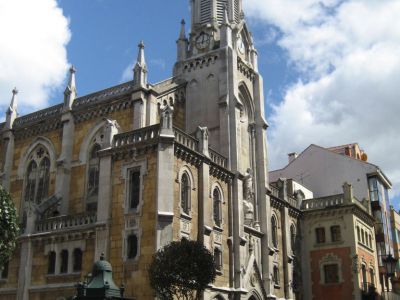 Iglesia del Sagrado Corazón (Church of the Sacred Heart of Jesus) is located at the center of a shopping street, Nueve de Mayo (9th of May). In 1881, the church used to be the part of Visitación de Santa María Order. In the 1970s, the convent and adjoining courtyard were demolished in order to build a modern shopping mall (The Salesians). The community was moved to a new building located in Naranco. The temple itself was saved from demolition due to its high cultural and architectural value. The church building was designed by Francisco Aparic and Juan Miguel de la Guardia in Neo-Gothic style, with a Latin cross in its basement. One of the temple's most curious features is the tower, which appears to “grow” from the center of the facade and rises above the structure as a pentagonal, narrow arrow.
Image by Adrian1205 on Flickr under Creative Commons License.