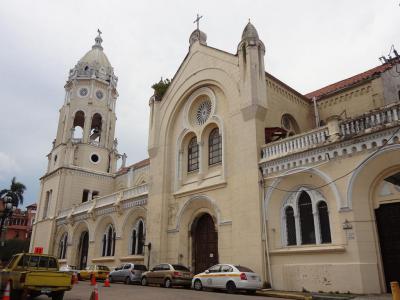 Iglesia de San Francisco de Asis, is also prominently known as the Church of Saint Francis of Assisi. It is a Roman Catholic Church, situated in the quaint town of San Fransisco in Panama City, in the historic district of Casco Viejo. This church is very popular for its magnificent view, making it a very famous tourist spot in Panama City. The church is small compared to the other churches and you will be dazed by its splendor as it is one of the most beautiful local churches.

Situated on Plaza Bolivar, the San Francisco de Asis was repeatedly destroyed by fire in 1737 and 1756. It was fully rebuilt in 1998. The church lies across the street from the Teatro Nacional (the National Theater). Down the street, just a block away, is the residence of Panamanian President, the Palacio de las Garzas.

The Iglesia de San Francisco de Asis was built of a stout stone structure way back in the early 1700s. Indigenous artisans from the nearby town of San Fransisco, supervised by Franciscan monks, helped to build the eight hardwood baroque altars. The elegant main altar consists of over 400 pieces of colorfully painted tropical cedar and is an impressive example of colonial art. You can have an amazing life time experience by visiting this place.
Image by Desi burgos on Wikimedia under Creative Commons License.