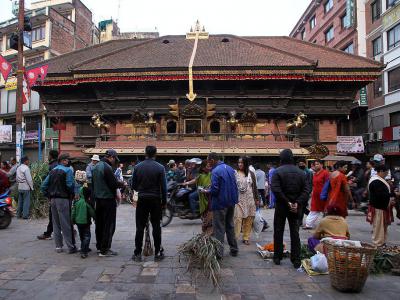 Indra Chowk is is one of the ceremonial and market squares on the artery passing through the historic section of Kathmandu. Its temples and bazaar draw streams of pilgrims and shoppers. The square is named after Indra, lord of heaven in Hindu mythology. The intersection of Indrachok, along with Maru, Kathmandu Durbar Square, Makhan, Jana Baha, Asan and Naxal, mark the old India-Tibet trade route that is now a vibrant market street.
It is considered to be a center for the sale of textiles. Blankets, clothes, shawls, and scarfs made of pashmina are a local treasure, as this fabric is now banned in India. Pashmina is a kind of Nepali cashmere and in Indra Chowk it can be bought at very low prices. Also, sari material can be purchased in this market.
Image by Lavenderstreak on Wikimedia under Creative Commons License.

Want to visit this sight? Check out these Self-Guided Walking Tours in Kathmandu. Alternatively, you can download the mobile app "GPSmyCity: Walks in 1K+ Cities" from iTunes App Store or Google Play. The app turns your mobile device to a personal tour guide and it works offline, so no data plan is needed when traveling abroad.

Pashupatinath Temple is situated near the Tribhuvan International Airport in Kathmnadu. The area in which it is located is truly picturesque - surrounded by virgin jungle. Though you may not be allowed to enter Pashupatinath, you can admire it from the other bank of the river, or you can visit some famous temples situated in this region. We encourage you to take the Pashupatinath temple...  view more

Kathmandu valley has been traditionally considered one of the greatest treasure houses of art. Its culture can be discovered by visiting the numerous stupas, temples and shrines. But there is much more to Kathmandu than just that. Listening to a Newari music performance or learning about Nepal by visiting a museum, will give you a cultural insight into the destination. Take this self-guided tour...  view more