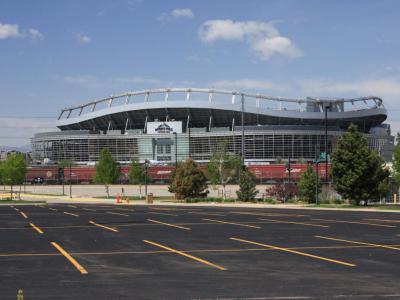 Invesco Field at Mile High (commonly known as Invesco Field or Mile High) is a stadium in Denver that replaced the identically sized, but commercially obsolete Mile High Stadium (named for the fact that Denver is exactly one mile above sea level) in 2001. Invesco paid $120 million dollars for the naming rights. Invesco Field at Mile High is used primarily for football games. It is the home field for Denver's National Football League team, the Denver Broncos. The stadium also hosts the city's Major League Lacrosse team, the Denver Outlaws. In college football it has hosted the rivalry game between the Colorado State University Rams and the University of Colorado at Boulder Buffaloes. It is also used for the CHSAA class 4A and 5A Colorado high school football state championship games, and has been used for the CBMA Marching Band Finals.
Image by David Herrera on Flickr under Creative Commons License.
Sight description based on wikipedia