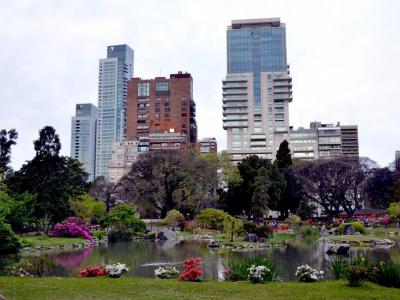 The Japanese Garden is a tranquil green space in Palermo, Buenos Aires. The lush green garden has over 150 species of plants brought to Argentina from Japan.

The Japanese community of Buenos Aires established the five-acre garden in gratitude to the new nation where they made their home. It has all the amenities of a traditional Japanese garden including bridges, an artificial lake, a waterfall and a tea house. It was first laid in 1967 by the Japanese Cultural Foundation of Japan. The foundation maintains the garden till today. In 1977, it was redesigned by Japanese landscape artist, Yasuo Inomata based on the design of the Zen Gardens in honor of the visit of the Japanese Emperor to Argentina.

The Japanese Garden comprises a large artificial lake with bridges leading to small man-made islands. The lake has plenty of koi fish and the garden shop sells fish food for visitors who wish to feed them. The main island is the Island of the Gods. The curved Buena Ventura Bridge takes visitors to the Island. There is a monument to the immigrant within the garden and a large Japanese peace bell. There is also a Japanese restaurant and a tea house where Japanese cultural exhibitions, performances and events take place frequently. On weekends, tours are conducted to teach visitors the meaning and significance of a Zen garden.

Why You Should Visit:
To enjoy a Japanese culture sample in the heart of a Latin American city.
Good escape from the streets and plenty of areas to take photos.

Tip:
After a zen stroll, have lunch at the on-site restaurant (best by reservation). Not cheap, but the sushi quality is one of the best in BA.
Along with your meal, you will get to see displays of Japanese culture, art & clothing and to access a viewing balcony that overlooks the Jardín.