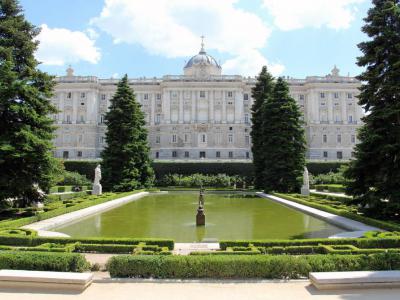 Jardines de Sabatini cover over two hectares on the North side of the Royal Palace. They are named after Francesco Sabatini, an 18th-century architect who designed the Royal Stables, which once stood on the site of today’s gardens. The layout is based on the designs he made with the same idea in mind for the use of the land before the stables were built.

This layout is similar to classical French gardens that you would see on a grander scale at Versailles for example. Formal Neo-classical, with small walkways and neatly trimmed hedges in geometrical patterns, you will find a haven of peace here. The trees, which are also planted in geometrical patterns, include pines, cedars and magnolias, whose waxy flowers perfume the warm air.

The gardens, which were first opened to the public in 1978, are graced with statues from the palace itself and represent Spanish kings. There are several benches around the long rectangular pond and from there you have a good view of the North face of the Royal Palace.

Why You Should Visit:
To find a shady spot and have a rest especially on a hot Summer's day, or to enjoy the color show in Autumn.
A very convenient stop to make if seeking to combine visits to the Palacio Real and Museo Cerralbo.