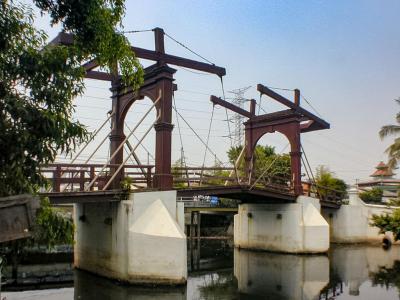 Jembatan Pasar Ayam or Chicken Market Bridge (also known as Kota Intan Bridge) is a wooden bridge built in the 17th century by the Dutch authorities. Named after a nearby chicken market placed in its immediate vicinity, the bridge linked the Dutch fort to the British one located on the other side of the Grand Canal.

Because the Grand Canal was transited by numerous vessels, the bridge was equipped with a leverage system that pulled the middle parts of the bridge, allowing ships to follow their normal track. While it successfully served its purpose for a long period of time, now the bridge is no longer functional. After serious restoration procedures undergone in the 1970s, the bridge was put in function for pedestrians. Even though it is no longer mobile, the bridge is a landmark of the region, attracting tourists willing to have their share of local history.

Legends say that, while visiting Batavia, Vincent Van Gogh was impressed by the Jembatan Pasar Ayam and celebrated it in one of his paintings.
Image by chatfly on Flickr under Creative Commons License.