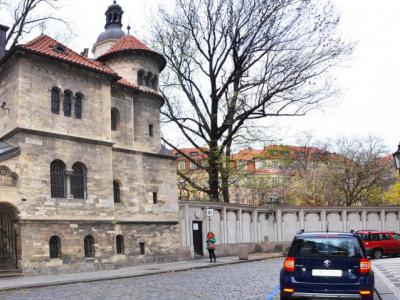 Jews started to settle in Prague as early as the 10th century, but it wasn’t until the 13th century that they were ordered to give up their homes and move into a rather small area located between the Old Town and the River Vltava. Prague’s Jewish Quarter is well worth a long visit.

After the 13th century, the “ghetto” as it was called grew as more and more Jews were sent to live there. At one time over 18,000 people lived in the area and restrictions on their movements and trade outside the Quarter became harsher and harsher. It’s little wonder that in the 17th century, according to legend, Rabbi Lowe created the Golem of Prague out of clay from the Vltava River and gave it life using a formula said to be the same that God used to give life to Adam. The Golem was meant to protect the Jews from persecution, but it ran amok and Rabbi Lowe had to destroy it.

Renovations were made between 1893 and 1913, but luckily the Quarter still retains the best Jewish monuments in Europe including six synagogues, the Jewish Town Hall and the Old Cemetery. During the Nazi occupation, the Quarter was left intact because the Nazis wanted to use it after the war as a “Museum of an Extinct Race”.

Today the Jewish Quarter is administered by the Jewish Museum which houses over 40,000 artifacts of Prague’s Jewish community. The museum ticket covers a guided visit to the Old Jewish cemetery and four synagogues.

Why You Should Visit:
Historical center of Jewish religious and social life in Prague.
Apart from the Jewish Museum with its historical exhibits, you get to see the synagogues, the cemetery, and the WWII memorial.

Tip:
For lovers of designer shops, Parizska Street has just about every great fashion house represented.
Alternately, feel free to drop by a Jewish restaurant and even some stores selling Jewish artifacts & literature.
Image by Maros M r a z on Wikimedia under Creative Commons License.
Sight description based on wikipedia