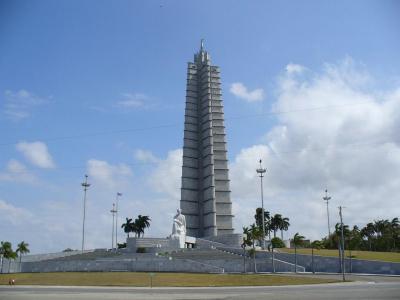 The 358 tower, designed by a team of architects led by Enrique Luis Varela, is in the form of a five-pointed star, encased in gray Cuban marble from the Isla de la Juventud. Construction of the tower began in 1953 on the 100th anniversary of José Martí's birth. Compensation for local inhabitants forced to move in order to make way for construction, caused further problems. Their case was taken up by a young Fidel Castro. The monument was finally completed in 1958 during the final days of the Batista dictatorship. The José Martí Memorial includes an enclosed observation deck on the top floor, the highest point in Havana, and it's accessible by elevator which gives commanding views over the city in all directions.

This sight is featured in a self-guided walking tour of Havana, Cuba within the mobile app "GPSmyCity: Walks in 1K+ Cities" which can be downloaded from iTunes App Store or Google Play. Please download the app to your mobile phone or tablet for travel directions for visiting this sight. The app turns your mobile device to a personal tour guide and it works offline, so no data plan is needed when traveling abroad.

Discovered and conquered by the Spaniards, Havana has turned into a major religious center of Catholicism in the Caribbean. Although a communist regime is in power at the moment, many of the churches, cathedrals, and other religious buildings are preserved and still give a glimpse of the religious heritage of Havana.

Old Town of Havana is a perfect place to feel the Spirit of Cuba. This part of the city has a unique atmosphere and history. The city was founded by the Spanish in 1519. Thousands of tourists visit it each year. UNESCO proclaimed it a world heritage site. Take this astonishing walking tour in the middle of Old Havana.

The city of Havana was founded in 1511. Today, Havana is the capital of Cuba and one of the most beautiful cities in the world. Havana is also one of the most popular tourist destinations in the Caribbean region. Almost perfect weather conditions makes it a great spot for taking a vacation. This walking tour will help you explore the center of Havana.