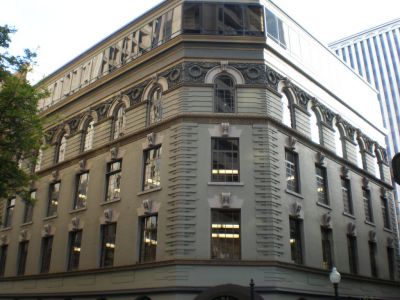 The site of the Judd building was purchased in 1861 by Dr. Gerrit P. Judd, a Protestant missionary, and his wife. Judd was a close adviser to King Kamehameha III, and a minister of government in the Kingdom of Hawaii. He also assisted greatly with the creation of Hawaii's constitution, and helped Hawaii return to sovereignty in 1843. After the doctor's death in 1873, the property was bequeathed to his son, Hawaii Supreme Court Justice Albert F. Judd.

The Judd building was created in 1898, and was one of the first rental commercial spaces in Hawaii, and the very first Hawaiian building to contain a passenger elevator. It was the first home for the Bank of Hawaii, which was later purchased by the Inter-Island Steam Navigation Co., who then sold it to the First Federal Savings and Loan in 1950.

The building itself was designed by architect Oliver G. Trapenhagen. He had moved to Hawaii from Minnesota because of his ailing daughter and a lack of architectural jobs in the mainland U.S. at the time. The Judd Building is a four story brick edifice built in a Renaissance Revival style, with a coral rock foundation. After its completion, Trapenhagen went on to create several other well-known Hawaiian buildings, including the Moana Hotel and the Lewers and Cooke Building.
Image by Joel Bradshaw on Wikimedia under Creative Commons License.