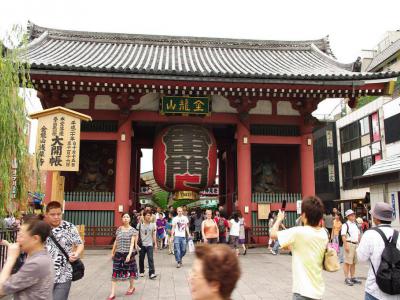 The Kaminarimon is the first of the ornate gates that lead to the Senso Ji Buddhist temple in Asakusa, Tokyo. The word Kaminarimon translates as "Thunder Gate".

The Kaminarimon was constructed over a thousand years ago by Taira no Kinmasa during the Samurai period in 942. It was relocated to the present location in 1635. It burned down in 1639 and was constructed again by the shogun lord Tokugawa Iemitsu. The present structure was renovated in 1960.

The Kaminarimon is 11.7 meters tall and 11.4 meters wide. There are four statues within the gate. In the front, the statue of the Shinto God of the wind Fujin is on the east and the God of thunder, Raijin is on the west. Towards the back of the gate are statues of the Buddhist God Tenryu and the Goddess, Kinryu. A giant red paper lantern or Chochin hangs in the center that was a donation of the founder of the company now called Panasonic. The front of the lantern has the name Kaminarimon painted and on the back is the official name of the gate, Furaijinmon. It has a wooden base with a sculpture of a dragon. It is collapsed during festivals to allow temple objects to pass through the gate.

Why You Should Visit:
Iconic Asakusa photo spot!
Peaceful area full of local food to try.

Tip:
The gate is best seen illuminated at night when crowds have thinned out.
Image by Fg2 on Wikimedia under Creative Commons License.
Sight description based on wikipedia