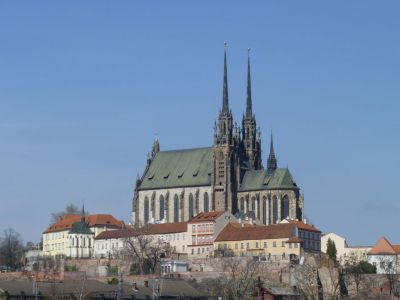 The interior is mostly Baroque, while the impressive 84m high towers were built between 1904 and 1905 by architect August Kirstein in the Gothic Revival style. Traditionally, the bells of the Cathedral toll midday at 11 o'clock in the morning instead of at 12 o'clock. According to the legend, during the Thirty Years' War, the invading Swedes laid siege to the city of Brno but had promised that the attack would be halted if they had not succeed in taking the city by midday on August the 15th. When the battle was underway some shrewd citizens decided to ring the bells an hour early, fooling the Swedes who broke off the siege and left empty-handed. Brno was the only city to repel the Swedes during this war.
Image by Podzemnik on Wikimedia under Creative Commons License.
Sight description based on wikipedia