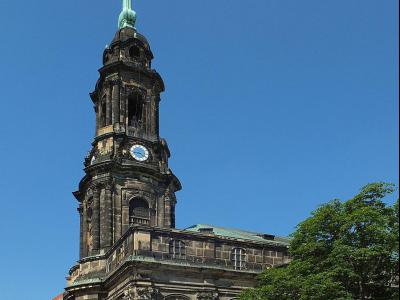 Located at the center of the Old Town in Dresden near the Altmarkt square, the Kreuzkirche has one of the finest Boy’s Choirs in Europe. The 92 meter high tower has a balcony from which one can see a 36 degree view of the city of Dresden.

A small church stood on the location of the present Kreuzkirche from the early 12th century. In 1388, it was formally dedicated to the Holy Cross. The church burned down and was rebuilt five times. The recent reconstruction was in 1955 after the World War II bombing of the city. Kreuzkirche is the largest church in Saxony. The 13th century church was replaced by a gothic building after a fire. In 1492, the Gothic structure caught fire and was rebuilt. In 1539, the first Lutheran service in Dresden was held in the newly reconstructed church. A tower was added to the church between 1579 and 1584. In 1760, the Prussian army bombarded and damaged the church. Architect, Johann Georg Schmidt designed a new neoclassicist structure and the church opened its doors again in 1792.

The newly rebuilt church in 1955 has a simple interior. The acoustics in the hall are impressive especially when the famous Boy’s Choir performs and on Saturday afternoons when cross choir vespers take place.
Image by Christoph Münch on Wikimedia under Creative Commons License.